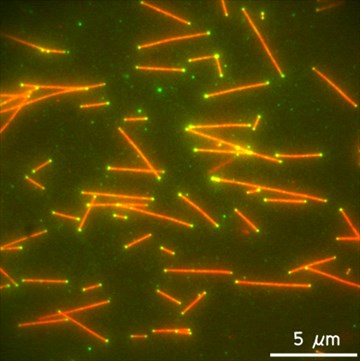 Microtubules are biological polymers that alternate between periods of growth and shrinkage. This process, termed dynamic instability by its discovers Mitchison and Kirshner, is crucial for microtubule length regulation, for the exploration of intracellular space, and for cellular force generation. Despite its central role in cell biology, dynamic instability is poorly understood.

We are taking several complementary approaches to understanding dynamics..

(ii) We have used these assays to figure out how microtubule-associated proteins (MAPs) regulate microtubule dynamics. We have shown how depolymerizing kinesins target microtubule ends and couple ATP hydrolysis to microtubule shortening (Helenius et al. 2006, Varga et a. 2006, 2009, Friel and Howard 2011); we discovered that XMAP215 is a processive polymerase (Brouhard et al. 2008, Widlund et al. 2011); and we found that the end-binding protein EB1 recognizes the nucleotide state of tubulin (Zanic et al. 2009) to increase catastrophe and to synergize with XMAP215 to increase microtubule growth rates (Zanic et al. 2013). Recently, we discovered that a yeast kinesin, Kip2, is a microtubule polymerase and has the fascinating and unexpected property that the longer the microtubule the greater is the acceleration of growth (Hibbel et al. 2015)! This is a form of positive feedback. These single-molecule studies show that we are are still scratching the surface of as far as the variety of activities kinesins and other microtubule associated proteins have on the regulation of the cytoskeleton. 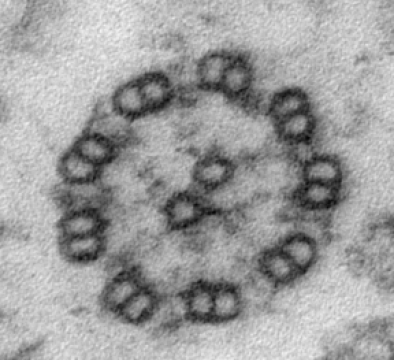 (iii) Most biochemical and biophysical studies on microtubules use tubulin from mammalian brain because of the protein’s abundance in this tissue. However, brain tubulin is highly heterogeneous due to many different genes as well as post-translational modifications. We are therefore using two simplified systems - budding yeast and  the Chlamydomonas cilium - to study tubulin dynamics and its regulation by MAPs in order to dissect their role in controlling microtubule length.