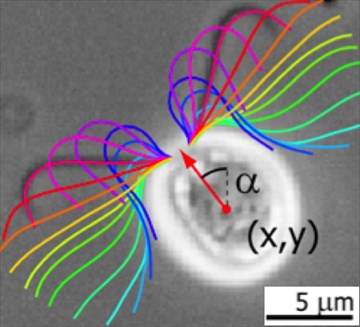 sliding and bending in cilia and flagella has been known since the classic experiments of Gibbons, Brokaw and Satir in the 1960s and 1970s. However, how the activity of the dyneins is coordinated to give a periodic beat remains an open. We are bringing a new constellation of techniques to the problem. In earlier work, we hypothesized that the dyneins are coordinated through a force-sensing mechanism: sliding forces provide positive feedback that switches the activity of the motors across the axis of the axoneme (the motile structure within cilia and flagella) and couples the motors along the length of the axoneme (Riedel-Kruse et al. 2007, Howard 2009). Using high-speed imaging and high-precision image analysis, we showed that our hypothesis can account very satisfactorily for the beat of mammalian sperm.

We are now using the single-celled alga Chlamydomonas Reinhardtii as a model system to study (i) the beating of isolated, reactivated axonemes, the motile structure within cilia and flagella (Sartori et al. arXiv, 2015, Geyer et al. 2016, Sartori et al. 2016), (ii) the activity of axonemal subassemblies (Mukundan et al. 2014) and individual dynein molecules purified from these axonemes (Alper et al. 2013, 2014), and (iii) the role of hydrodynamics in shaping the beat pattern (Friedrich et al. 2010) and swimming path (Geyer et al. 2013). In this way we hope to obtain a molecular understanding of one of the most elegant and enigmatic examples of cell locomotion. Oscillators are a paradigms of emergence because the system behavior obscures the contributions of the individual players. We hope to the obtain the first truly molecular and biochemical understanding of a cellular oscillator.
Additional NavigationClose