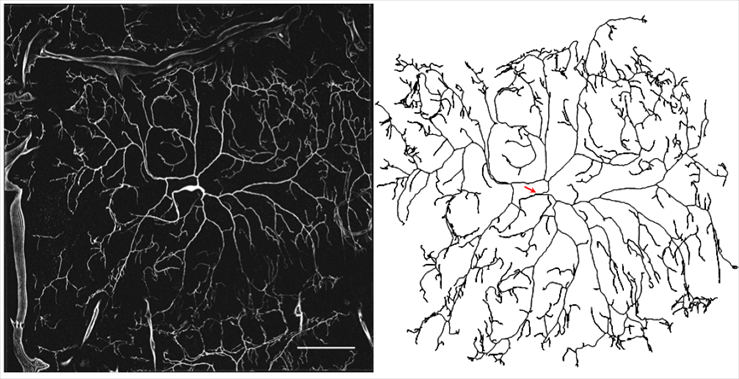 Confocal image of a class IV dendritic arborization neuron in the fly (left) and its skeleton (right)
The architecture of the brain and its constituent neurons is staggeringly complex. A fundamental insight into the working of the brain was made by the Spanish anatomist Ramon y Cajal who discovered the “dynamic polarization of neurons” (Ramon y Cajal, Nobel Lecture 1906). According to this principle, neurons are polarized cells, with dendrites and axons, usually on opposite sides of the cell body, and he deduced that the flow of information is also polarized, in a way that respects cell polarity: “nervous movement [i.e. electrical activity] in these prolongations [i.e. the dendrites] is towards the cell or axon, while it is away from the cell in the axons”. By studying the morphology of individual neurons and identifying the dendrites and axons, he was able to map the flow of information through the nervous system. Thus, an insight from cell biology, i.e. cell polarity, provided the key to understanding the functional anatomy of the brain. My intuition is that the cell biological principles underlying branching morphology will likewise provide key information about signaling and information processing by neurons.
Our goal is to understand the principles underlying the branching of neurons, especially dendrites. We and others have shown that the microtubule cytoskeleton play a fundamental role, not just in “feeding” neurons, but also in building them in the first place. Using highly branched mechanoreceptors in flies as a model system, we are trying to understand the tradeoffs between intracellular transport from the cell body into the dendrites, on the one hand, and the flow of information from the dendrites back to the cell body, on the other.
Additional NavigationClose